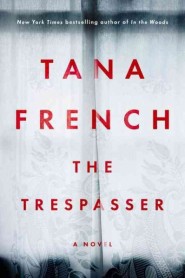 Recently I set out on a quest to find crime novels that would fit my persnickety tastes, sparked by finishing the most recent entry in Tana French’s Dublin Murder Squad series, The Trespasser. I have enjoyed most entries in this series, all of which feature rich character development, setting, and atmosphere. The Trespasser was my favorite by far due to the main character, Detective Antoinette Conway. If you are not familiar with this series, each book focuses on a different lead detective, although they may also end up playing smaller roles in other entries. I loved Antoinette Conway, a bristly yet sympathetic character with huge chips on her shoulders, one from being a woman in a male-dominated, sexist department and one from growing up working class in Dublin. After finishing the book, I wanted more stories like this right away but didn’t know where to start. I don’t read many series, and the only other mystery series I have read all the way through is Kate Atkinson’s Jackson Brodie novels.

So I went looking for recommendations, both on various book sites and from friends on Facebook. Here were my guidelines:

I got quite a few recommendations from reader friends, so I started with those. Here they are ranked in how much I enjoyed them and how they fit what I was looking for.

A Distant Echo by Val McDermid: This was the book that was closest in style to the Tana French books I loved. It was very atmospheric, good character development, intriguing crime and investigation. However, it is billed as the first of the Karen Pirie series, and she barely makes an appearance until the end, so I didn’t get a feel for her character. I will have to read the second book in the series (A Darker Domain) to get a better feel for the series. (Bonus: I learned Scottish term that perfectly describes this gloomy spring weather we are having, “dreich”.)

Garnethill by Denise Mina: This one was very dark but definitely intriguing. It is not a police procedural as such, but involves an amateur sleuth who sets out to solve her boyfriend’s murder after she and her brother both find themselves under suspicion. I enjoyed the feminist revenge aspect of this one, and will definitely read the second in the series.

Indemnity Only and Dead Lock by Sara Paretsky: These are the first two V. I. Warshawski books, and I enjoyed them. I find, however, that I just don’t enjoy private investigator books as much as do ones that involve police investigations. I did enjoy the gritty early 80’s Chicago settings, and all the tough female friends that are always ready to help Vic out. It gets pretty unbelievable at times, with Vic putting herself in ridiculously risky situations that you know she’ll get out of, but it’s fun. I’ll read more when I want a quick, fun read.

The Cold Cold Ground by Adrian McKinty: This is the first in the Detective Sean Duffy series, set in 1980s Belfast. I found the setting and the main character pretty compelling, but the mystery was just okay. I may give the second one a try someday, but it’s not high on my list.

A is for Alibi by Sue Grafton: This one was fine, but it’s another private investigator series, and I did not find it to be as compelling as V.I. Warshawski. I did like that is was more realistic, but there just wasn’t enough there to make it memorable. I doubt I will continue with this series.

Devil in a Blue Dress by Walter Mosley: He’s popular so I thought I’d give this a try, the first in the Easy Rawlins series. I enjoyed the time period and the setting, but in general I found it rather sexist and a little gross. I doubt I’d read another by him.

If you know of any other authors or series I might like, please let me know! I haven’t sought out many mystery series before, so I know there is a bunch of good stuff I have probably missed.

View all posts by Kasia